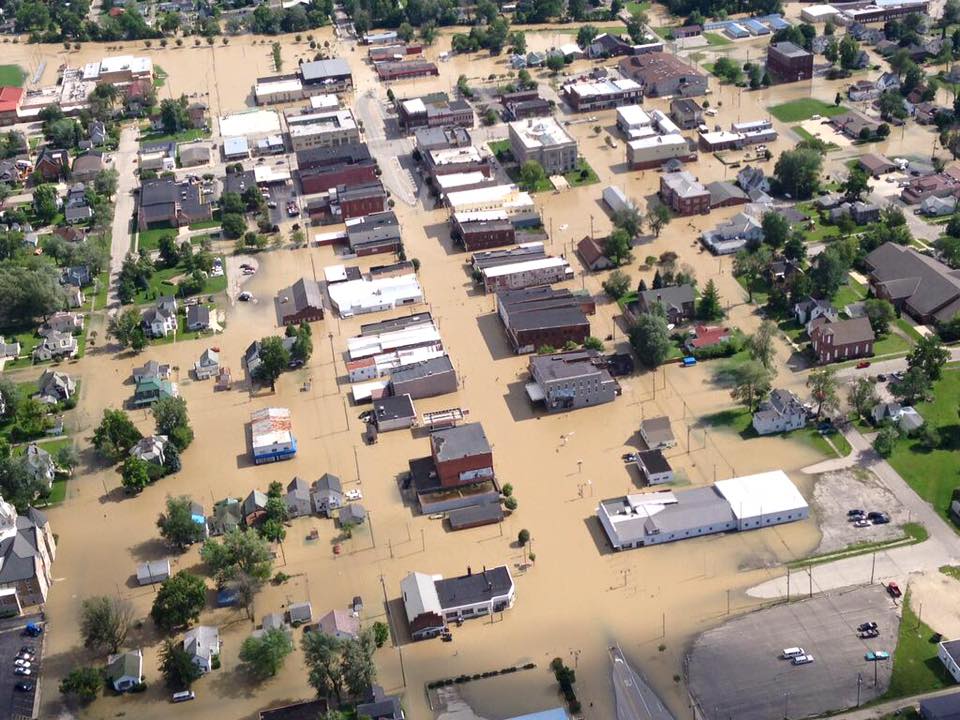 There are times when it really is the small things in life. It has been an especially wet summer. I wouldn’t be surprised if we already surpassed records. It has rained, a lot. This week we had an intense amount of rainfall, and our small town of Portland flooded. 5 years ago our town had a historic flood. Many of the small local businesses in our town flooded. It was an intense amount of work to get everything cleaned out and back to business. So today all of the local business owners were at it again. You could hear it in their voice, and see it in their eyes, the stress, the work, and so much to clean up. My office is also downtown but we are literally one of the few buildings that doesn’t flood. My home was also not affected. It is difficult to see homeowners and business owner’s alike struggle to put back the pieces. Without a doubt it is a lot of work, and a huge mess. The flood waters have mostly receded and everyone is kicking it into high gear. Our streets are lined with office furniture, supplies, electronics and all sorts of belongings. Everyone is working to get their place dried out and repaired.

Today I was meeting with my summer intern Shawna. As we were talking Grid, who is one of our adult leaders and a Campus Life director walks by with a large bowl of sandwiches. He with some other students were helping a local business clean up. Just two days ago they cancelled a trip to a water park that he had prepared a load of finger sandwiches for students to eat. They were all in our office refrigerator. He said the people he was helping clean up were getting them pizza. He then commented we could give them out to other people working in town. Shawna looked at me and her eyes lit up. We got up and immediately put a plan together. Our office manager told us there were two large bags of potato chips we could also use. We put chips in baggies and got some bottled water. Shawna carried the bowl of sandwiches and I carried a box of bottled water and chips.
We hooved our way up and down the streets looking for people who were cleaning up. I can’t even tell you how thankful people were. I was so taken back by how much they appreciated a simple lunch. A few had already had lunch, but the majority of them had not. They were working hard to get it all cleaned up. It was such a good feeling to provide a simple lunch to people. Over and over people would ask us where we were from and why we were doing it. A few even though we were trying to sell lunch. It was a simple gesture. It all came from a water park event that was cancelled. Grid made a bunch of sandwiches and then it seemed like they had no purpose.

Isn’t crazy how God can take something that we planned for another reason and repurpose it to feed some hard working small business owners. They obviously are having a particularly bad day. I don’t know if you have ever had to clean up after flood damage. It is a mess, and incredibly challenging, even for professionals. Who knew that some unused sandwiches, chips and bottles of water could do such good? It simply took us getting off our butts and putting them to great use. I think much of life is like this. The things we need to help others are available it just takes someone who is willing to do the work. I love that the sandwiches Grid made were able to be put to use. We told everyone they were from The Rock (the Church where I’m employed) and Campus Life. Even those who already had ate were incredibly thankful for the gesture.

I’m thankful for the enthusiasm of Shawna. She got so excited and it got me excited to go out and serve the people in our community. It obviously was a simple act of kindness, and really not a huge deal. I can’t help but wonder if I did things like this more often the impact it would make. Then it makes me think about what it would be like if all of us would do the same. Coming together after a difficult time is a beautiful thing for a community. I am thankful I had the opportunity to help those around me in a small way. I can’t help but think we are most like Christ when we are serving others. Matter of fact he was known to provide a meal or two for those who were hungry.

Be the first to start the conversation.

My Thoughts Delivered to Your Inbox